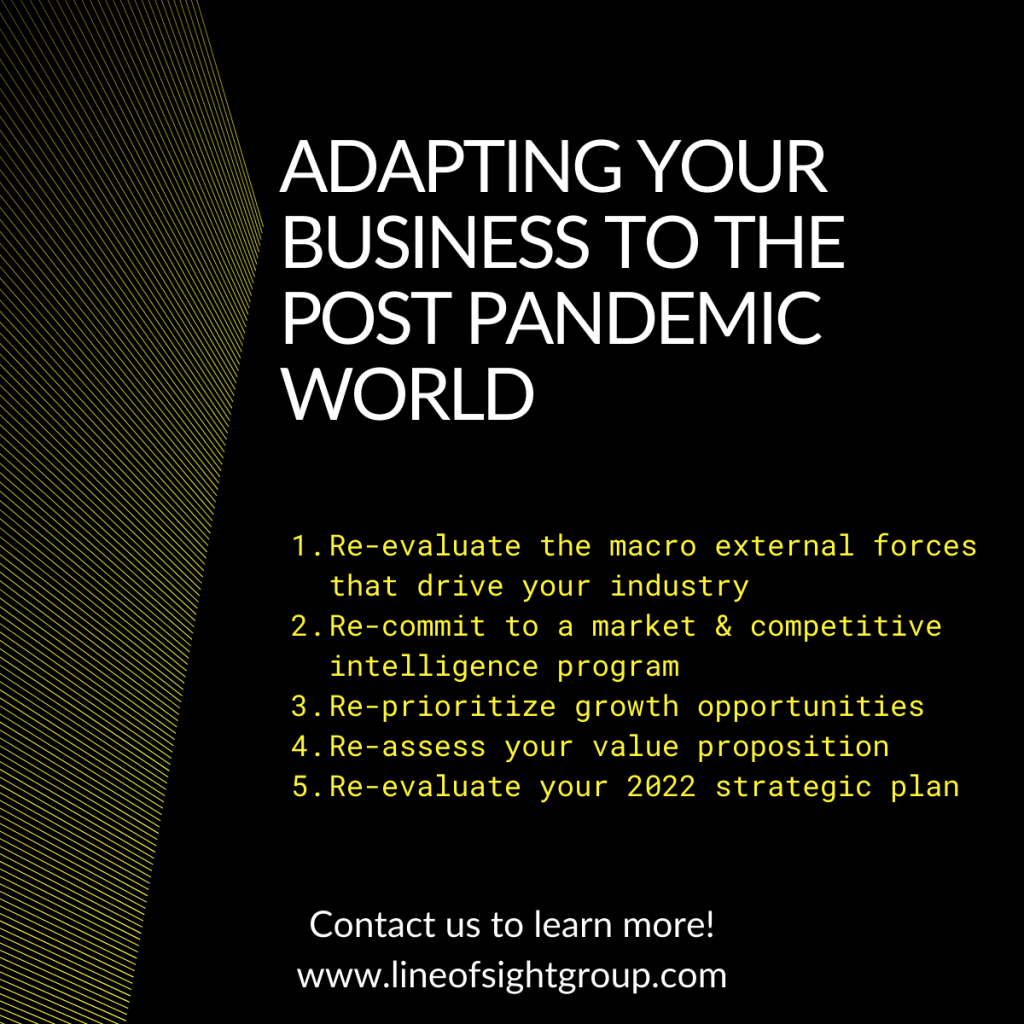 The return to normal is imminent. Vaccines are rolling out. Roadways, parks, stores and office buildings are bustling with activity. As we leap back to “normal,” it’s important to not simply dust off old strategies or programs designed for the pre-pandemic world. Rather, your time will be well spent evaluating the changed landscape around you to ensure your strategy is aligned with the needs of your target market.

What’s happened over the past year? In some respects, time stood still. Many corporate office desks remained untouched and long planned business strategies were put on hold in favor of quickly developed war plans to adapt to a world in pandemonium.

But what has changed? Your industry. The environment, Your competition. There may be new competitors and forces that you didn’t think about before. Your competition may have built up new strengths that bring new risks to you. Or new growth opportunities may be emerging based on the “new normal.” Regardless, all have evolved to a point where you can no longer fully rely on the old intelligence you had on them.

And so has the customer journey changed. Consumers may choose or respond to products and services differently than they did in the past. They expect more flexibility but at the same time may have more patience or understanding. Brand loyalty and spend has changed either for the good or bad depending on the industry. What they value most in a company or its products has shifted. How and what they will ultimately choose to spend their resources on may be much different.

This profound change has created new needs for businesses and a fresh look on how they approach their market.

How can you best adapt to the new post pandemic world so you can RE-FOCUS, GROW AND PROTECT your business?

Changes in the external environment – customers, competition and driving forces – can often represent both a threat and an opportunity. However, it is only those organizations that dedicate adequate attention and resources to understanding those changes through ongoing intelligence, analysis, action and feedback that are able to ‘outsmart’ their competition and turn threats into opportunities – and successfully take advantage of them.

When I guest lecture with the MBA students at the University of St. Thomas, I often begin with a question: “What do the following have in common?”

“They are all extinct!” comes the response quickly.

“Because they failed to adapt.”

With a bit of exasperation, they respond with something like this: “CHANGE!! THEY WERE UNABLE TO ADAPT TO CHANGES IN THIER ENVIRONMENT.”

“EXTERNAL,” I add. “Unable to adapt to changes in their EXTERNAL ENVIRONMENT.”

In order to adapt to changes in your industry, you first have to understand what industry change is. Next you have to know what to look for. Then, when a change is recognized, you have to know whether or not it is important, and if so, only then should you make plans to act on it.

Industry change is EXTERNAL. It originates from outside the organization rather than internally. Market demographics, technology, customers and competition are examples. These external factors, called ‘change drivers’, are less controllable, harder to forecast and can be more disruptive than changes that originate internally in an organization. Just think about the dramatic effects that the Coronavirus has had on our economy and entire way of life in 2020!

Start at the end. The first step is to know what to look for. It is well known that data volumes are exploding. In 2016, it was written that more data had been created in the past two years than in the entire previous history of the human race. [1] Luckily, only a small fraction of that data would ever be relevant to your organization.

By starting at the end, and determining what the data would be used for, it is possible to focus your efforts. For example, when considering how to not become extinct, the data that would represent a threat to our existence is most important. Best practice organizations start by defining a set of ‘key topics’ based on the assumptions in their current strategic plan or potential opportunities and threats, and are used to guide their change monitoring activity.

‘Movie’ versus ‘snapshot’. Change, of course, happens over time. Changes in the external forces and stakeholder relationships can only be recognized using a longitudinal approach, which compares data points in time. Most organizations today find themselves in a world where the pace of change is fast and accelerating. Best practice companies do constant surveillance and continuous updating by an individual, group or outside partner with this responsibility. The U.S. military may have the world’s best capabilities for this, as designated intelligence officers constantly gather intel from the front lines.

So What? Just because change is occurring and relevant to an opportunity or threat, doesn’t mean it is important. To understand if the change is significant, it is necessary to apply relevancy filters such as: Is the data real or is it only an outlier? Is it outside of expectations? What is the size of the change? What market segments are being impacted? What are the possible consequences and implications of the change?  This is where human analysts with knowledge of your business, aided by text analytics and artificial intelligence (AI) tools, apply their experience and raise red flags where appropriate. These red flags are called out in the regular updates and summary reports routinely circulated to managers and executive teams.

“BlackBerry proves that Andrew Grove really did have it right when he said, ‘only the paranoid survive.’ That’s probably the best lesson CEOs can take away from BlackBerry’s fall.”

What Now? Once recognized as important and relevant, executives can begin making plans for appropriate response. The first step in the response planning is a ‘deep dive’ analysis that is focused on the specific opportunity or threat to check assumptions, manage risks and develop a set of strategic options. Those options can further be played out in scenarios or war gaming exercises.

Ultimately, adaptive change means that executives must make investments and allocate resources to address the opportunity or threat. These are the ‘bets’ that executives make and are at the core of business strategy. Developing and utilizing a systematic process for gathering industry, market and competitive intelligence enables executive teams to make those bets swiftly, efficiently and confidently.